For businesses concerned about environmental issues, using computer technology is a double-edged sword. In some instances, it reduces your company’s carbon footprint. However, computer technology also presents significant environmental problems, some of which are difficult to control. Paper Use According to Reduce.org, each office worker uses an average 10,000 sheets […] 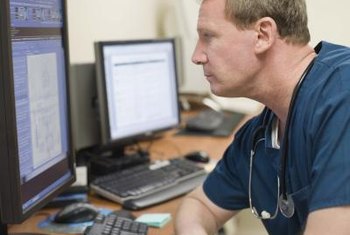 According to Reduce.org, each office worker uses an average 10,000 sheets of copy paper every year. Each employee discards more than 350 sheets of paper annually, according to the National Resources Defense Council. Maintaining your company’s files as electronic documents reduces the need for paper records and the files to store them. As a bonus, reducing your company’s paper consumption frequently also yields significant savings. Reading newspapers and magazines online or as downloaded documents represents another means of reducing paper consumption.

One cross-country flight of 2,500 miles for one person results in an emission of 760 pounds of carbon dioxide, according to the nonprofit TechSoup. This amount is equivalent to 5 percent of the electricity use for one U.S. home for a year. Many companies have turned to virtual meetings, Web conferences and webcasts to replace some or even all company travel. In addition to the decreased demands on fossil fuel, holding virtual meetings saves travel time and money that would otherwise be spent on gasoline, hotel rooms and airfare.

Electricity use from computers has emerged as a major financial and environmental concern for businesses. Large companies often have dedicated data centers that generate tremendous electricity demands, not only for running the equipment but also for dissipating the enormous amount of heat generated by running the computers, American City and County states. Computers used by small businesses also create significant energy demands. Simple actions such as turning off computers at night and turning off Wi-Fi capability when it’s not being used can result in significant energy savings, along with saving $25 to $75 for each computer every year, according to the Environmental Protection Agency.

Electronic waste, or e-waste, accounts for nearly 5 percent of all solid waste worldwide, and much of it winds up in landfills, according to Greenpeace. In fact, about 70 percent of toxic heavy metals found in U.S. landfills comes from electronics that were tossed in the trash, according to Recycle San Diego. The problem is accelerating because individuals and businesses upgrade their electronic equipment, including computers, much more often than before. In 1997, the average computer life expectancy was six years. By 2005, this life expectancy had dropped to two years.

Chris Blank is an independent writer and research consultant with more than 20 years’ experience. Blank specializes in social policy analysis, current events, popular culture and travel. His work has appeared both online and in print publications. He holds a Master of Arts in sociology and a Juris Doctor.